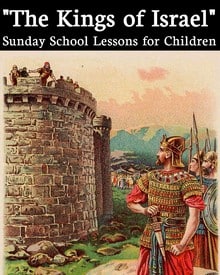 This is a continuation of the study of Israel’s Kings.  This lesson is part one in the life of King Hezekiah.  In 2 Chronicles 29 Hezekiah commands the priests and Levites to consecrate themselves and the temple.  Students will learn about the ministry of the priests and Levites in the Old Testament and how believers are called to be royal priests in the New Testament.
This lesson is only a guide to help you to prepare for your class.  It was created for older students but can be adapted for your individual needs.  Click here to see all the Bible lessons in this series.

Supply List:  Bibles, materials for object lesson
Learning Goal:  Students will learn that believers are appointed as royal priests to point others to Jesus.
Learning Activity #1:  Object Lesson on Sin  As we have studied Israel’s kings we have seen how sin continues to permeate the kingdoms.  King Ahaz (Southern Kingdom) followed the wicked example of the Northern kingdom and led his kingdom to worship false gods.  The sin of the people had become increasingly ‘gross’.  King Ahaz closed the temple doors and placed altars on every corner for the people to worship.  When Hezekiah began his reign he had a huge task before him.  He could either do something about the spiritual mess in his kingdom or allow God to use him to clean things up.
Test: Review Questions
Memory Verse: 1 Peter 2:9 “But you are a chosen people, a royal priesthood, a holy nation, a people belonging to God, that you may declare the praises of Him who called you out of darkness into His wonderful light.”

Introduction:  Biblical Historical background of priests and Levites.
(Exodus 32) When Moses was on Mt. Sinai receiving God’s laws for His people, the Israelites had grown impatient waiting for their leader to return.  They asked Aaron to make them a golden calf to worship.  When Moses came down the mountain and saw the people worshiping the golden calf he was angry.
Have a volunteer read Exodus 32:25-29.
(Depending how new to the Bible your students are share a brief description of God’s people Israel.  Israel is a nation of God’s people.  They are descendants of Abraham.  God promised Abraham that from his descendants the Savior would be born.  Abraham and Sarah gave birth to Isaac.  Isaac is the father of Jacob who had twelve sons.  These sons make up the 12 tribes of Israel.)  Levi was one of Jacob’s sons and his family is called the tribe of Levi or Levites.  This passage of Scripture is how the Levites were set apart to serve as priests and Levites.
God gave Moses specific guidelines for how the priests and Levites were to serve in the temple and to lead the people in worship.  Priests had to be descendants of Aaron (Exodus 28:1 Numbers 3:1-4).  Their job was to make offerings in the temple.  The Levites were assistants to the priests and were given different jobs to help the people worship God.  (Numbers 3:5-10)
During the time of Israel’s wandering in the wilderness the priests and Levites served in a tabernacle that could be taken apart and moved from place to place.  Later in Israel’s history during the reign of King Solomon a Temple was built.  The Temple was built in Jerusalem and God’s people came to the Temple to worship Him.
Now with that brief history of priests and Levites let’s return to our study of Israel’s kings. Turn in your Bibles to 2 Chronicles 29.
What is the spiritual condition of the Southern kingdom at this time in history?  (Review King Ahaz’s reign-people were sinful, temple doors had been closed, people were not worshiping God according to His law (worshiping at altars that Ahaz had built on every corner).
Let’s read verse 1-2.  Hezekiah’s father was a very wicked king.  Did Hezekiah follow his father’s example?  (No) His mother’s name was Abijah.  She was related to the priest Zechariah (2 Chronicles 24:20-22) It is very likely that she taught her son Hezekiah God’s laws and how to live a life that pleases Him.

The first thing Hezekiah does as king is clean up the sinful mess in his kingdom.  He opens the doors of the temple and has them repaired. He commands the priests and Levites to consecrate themselves and consecrate the temple.  (Verses 4-5)  Consecrate means to set apart or sanctify.  Sanctify means to purify or free from sin.
Whenever we study God’s Word we should always be thinking and even asking questions so we can learn and understand what we are studying.
God set apart the priests and Levites to lead His people to worship Him according to His laws.  What do you think happened to the priests and Levites during the reign of Ahaz that they would not stand up to his command to put a pagan altar inside the temple (2 Kings 16:15-18)? (Allow students to respond with their thoughts)
In the Bible the disease called leprosy is symbolic of sin.  A person with leprosy eventually loses feelings in their body.  An example would be that they might put slam their hand in the door and not feel a thing.
In a sense it seems that God’s people became desensitized to sin. Even the people God had given the job to teach the people God’s ways and to lead them in worship had become deadened to the power of sin and allowed wickedness to overpower them and God’s people.

King Hezekiah was alert to the spiritual condition of his kingdom and knew that the anger of the Lord had fallen on them (they were being punished) because of the sinfulness of turning away from worshiping the One true God according to His laws.  (Verses 6-9) He had the opportunity to use the position God gave him as king to turn the people back to God.  If the people repented of their sin and turned back to God, He would remove His hand of punishment. (2 Chronicles 6:36-39)

2 Chronicles 29:11-19 Read verse 11.  These priests and Levites had been chosen by God to serve Him.  It was a privilege and responsibility to do His work. These men obey King Hezekiah and  immediately get to work and purify themselves.  Then they took on the task to purify the temple.  Read verse 16.
The temple is a physical building where God’s people went to worship Him. God met with His people at the temple.  When Jesus died on the cross, was buried and rose again all who believe in Him become His temple.  The Holy Spirit lives in the heart of each person who believes that Jesus died for his/her sins.

2 Chronicles 29:20-24 King Hezekiah commands to offer the sin offering.
The priests obey Hezekiah and slaughter the animals that were brought to the temple for the sin offering.  Read verse 24.  The blood was shed to atone (cover) for all Israel.
In the Old Testament God’s requirements for worship point to what the Savior of the world would accomplish in the New Testament.  Jesus Christ is our sin offering who died once for all, shedding His blood so our sins could be cleansed forever (not just covered). (Hebrews 10)
2 Chronicles 29:25-34 Hezekiah gives order for burnt offering.
What takes place in this passage is another act of worship that was required by God’s law to worship Him. (Exodus 20:24)  The priests began to offer the burnt offerings and the Levites who were musicians and singers began to sing and play music.
The burnt offering is symbolic of complete dedication to God.  As the priests offered this to God they were saying they were giving their lives completely to God.

When the priests and Levites performed their tasks according to God’s law the response of those around them is found in these verses:  Read 2 Chronicles 29:28-31
King Hezekiah began his reign by immediately beginning to clean up the spiritual mess that his kingdom was in.  He led the priests and Levites to rise up and once again serve the Lord.  As a result God’s people were turning back to Him.
We live in a world that is spiritually messy.  We see sin in most every place we turn.  Can you think of places where people are not living according to God’s Word?  (Homes, schools, government, sadly even churches)
Our memory verse ties what we learned from 2 Chronicles 29 to our lives today.  Let’s read it together.  1 Peter 2:9 “But you are a chosen people, a royal priesthood, a holy nation, a people belonging to God, that you may declare the praises of Him who called you out of darkness into His wonderful light.”
Because of King Jesus who is our High priest we do not have to be from Aaron’s family to be a priest (Revelation 1:6, 5:10).  We become priests when we believe in Jesus and are adopted into God’s family.  We are given the privilege and responsibility to point others to Jesus so they can be saved and live forever with God.
If you are a believer how seriously do you take the responsibility of being a chosen, royal priest?  What sin needs to be cleared out of your life so that you can lead others to worship King Jesus?
If your sins have never been cleansed by believing in the Lord Jesus, today you can call on Him to save you.  If you have questions about how to be saved please talk to us and we can show you from the Bible how to be saved from your sins.
Close in prayer.
Review Questions: