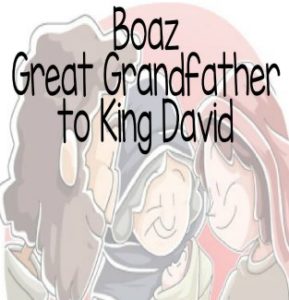 (Enter Naomi & Naomi)
Narrator: Now Naomi had a kinsman of her husband, a man of great wealth, of the family of Elimelech, whose name was Boaz.
Ruth: Please let me go to the field and glean among the ears of grain after one in whose sight I may find favor.
Naomi: Go, my daughter.
(Enter Boaz to other side of stage)
(Ruth goes near Boaz)
Narrator: So she departed and went and gleaned in the field after the reapers; and she happened to come to the portion of the field belonging to Boaz, who was of the family of Elimelech. Now behold, Boaz came from Bethlehem.
Boaz: (to Reapers) May the Lord be with you.
Reapers: May the Lord bless you.”
Boaz (to Reaper Leader): Whose young woman is this?
Reaper Leader: She is the young Moabite woman who returned with Naomi from the land of Moab.
Boaz: (to Ruth) Listen carefully, my daughter. Do not go to glean in another field; furthermore, do not go on from this one, but stay here with my maids.
Narrator: Ruth went home at the end of the day.
Naomi: My daughter, shall I not seek security for you, that it may be well with you? Now is not Boaz our kinsman, with whose maids you were? Behold, he winnows barley at the threshing floor tonight. Wash yourself therefore, and anoint yourself and put on your best clothes, and go down to the threshing floor; but do not make yourself known to the man until he has finished eating and drinking. It shall be when he lies down, that you shall notice the place where he lies, and you shall go and uncover his feet and lie down; then he will tell you what you shall do.
Ruth: All that you say I will do.
Narrator: So she went down to the threshing floor and did according to all that her mother-in-law had commanded her. When Boaz had eaten and drunk and his heart was merry, he went to lie down at the end of the heap of grain; and she came secretly, and uncovered his feet and lay down. It happened in the middle of the night that the man was startled and bent forward; and behold, a woman was lying at his feet.
Boaz: Who are you?
Ruth: I am Ruth your maid. So spread your covering over your maid, for you are a close relative.
Boaz: May you be blessed of the Lord, my daughter. You have shown your last kindness to be better than the first by not going after young men, whether poor or rich. Now, my daughter, do not fear. I will do for you whatever you ask, for all my people in the city know that you are a woman of excellence. Now it is true I am a close relative; however, there is a relative closer than I. Remain this night, and when morning comes, if he will redeem you, good; let him redeem you. But if he does not wish to redeem you, then I will redeem you, as the Lord lives. Lie down until morning.
Narrator: Now Boaz went up to the gate and sat down there, and behold, the close relative of whom Boaz spoke was passing by.
Boaz: (to Close Relative) Turn aside, friend, sit down here.
Narrator: And he turned aside and sat down.
Boaz: (to Close Relative) Naomi, who has come back from the land of Moab, has to sell the piece of land which belonged to our brother Elimelech. So I thought to inform you, saying, ‘Buy it before those who are sitting here, and before the elders of my people. If you will redeem it, redeem it; but if not, tell me that I may know; for there is no one but you to redeem it, and I am after you.’
Close Relative: I will redeem it.
Boaz: On the day you buy the field from the hand of Naomi, you must also acquire Ruth the Moabitess, the widow of the deceased, in order to raise up the name of the deceased on his inheritance.
Close Relative: I cannot redeem it for myself, because I would jeopardize my own inheritance. Redeem it for yourself; you may have my right of redemption, for I cannot redeem it. Buy it for yourself.
Narrator: And he removed his sandal.
Boaz: (to Elders) You are witnesses today that I have bought from the hand of Naomi all that belonged to Elimelech and all that belonged to Chilion and Mahlon. Moreover, I have acquired Ruth the Moabitess, the widow of Mahlon, to be my wife in order to raise up the name of the deceased on his inheritance, so that the name of the deceased will not be cut off from his brothers or from the court of his birth place; you are witnesses today.
Narrator: So Boaz took Ruth, and she became his wife, and he went in to her. And the Lord enabled her to conceive, and she gave birth to a son. Then Naomi took the child and laid him in her lap, and became his nurse.
Neighbor Women: A son has been born to Naomi!
Narrator: So they named him Obed. He is the father of Jesse, the father of David.
Don’t miss our full Sunday School lessons for Father’s Day and our Father’s Day coloring pages.